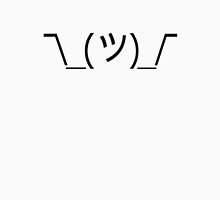 A student in my world history class just insisted she failed my class last semester. I didn’t agree with her, went to my computer and hunted down last semester’s results. She didn’t do great, but she earned a low C. It would have been a D had she not earned an 82 on my Final. So? Whatevs.

Actually though, she didn’t insist. She just kind of shrugged. You think you failed?—teacher runs to computer to dispute her self-failure world view—see, you didn’t fail! Shrug again. So, cool right? You could do even better this semester. Whatevs.

This Studentbot is sure she fell short of the classroom standard. Why? Shrug, that’s why. Because you always fail classes? Shrug. Because your language deficiency makes it so you don’t know what’s expected or quality? Encogimiento de hombres. Maybe you never saw your final report card from last term? You never log into the computer software that helps students track this data? ¯\_(ツ)_/¯ Maybe you aren’t conscious?

It could be a matter of consciousness. Awake, sure, but they’re never really alive. You’ve seen them. Studentbots are the zombies queuing for mozzarella sticks or orange chicken or some other grease from the cafeteria. You know, brick wall meets cell structure and sentience in the science lab. Bouncing some sort of social Frogger between classes—find this person, avoid that clique, alms to the vending machine, swing by this bathroom mirror instead of that bathroom with the people in those mirrors, plug in for the soundtrack to manage their chaos and your cool, don’t go down that teacher’s hallway in case you need to ditch later.

The increasingly dull environment of school has created some ignorant sense of nihilism. It always has. I participated in it when I was that age. But we didn’t have dozens upon dozens of hours cozied up with a standardized test. These Studentbots don’t know if they are rebelling against their future or protesting the lack thereof. Or, they are trying really hard to prove they are not trying really hard. Socially it’s way better to be clueless than shooting for 90s; adversely, Alicia Silverstone was consciously ditzy while arguing her way to an A. 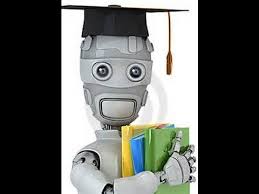 Another Studentbot this week was reviewing for an upcoming English quiz with a copy of that same quiz from 2014. I told her that seemed pretty shady considering that I know how deeply students struggle with that English class here in 2016. No—this was a studentbot insisting—I’m reviewing a quiz I took last week. That was a pretty fresh response. Not sassy. I mean fresh like some new fashion had hit the streets, like all of a sudden studentbots all over school review quizzes from last week—instead of like, you know, barely being cognizant of any academic deadlines otherwise. No, Mister! Reviewing-grades-that-I-can-no-longer-change-with-material-from-the-pre-Hotline-Bling-era is what’s up.

(Teacher note: That bullshit is some seriously misplaced nihilism. This wasn’t cheating for an upcoming assignment! This was not giving a fuck until there is nothing to give a fuck for! Way ahead of it’s time. I don’t always study, my friends, but when I do it’s already too late. The Internetati will look back on this moment and declare the Millennial generation dead. This is The Bot Generation. Do all things, but barely. Because, sure, it matters that I do well on stuff, but I can’t explain why stuff matters.)

I told her I was going to give her teacher the ancient assignment and leave it up to them. The Studentbot played it cool. A little talking under her breath. The          ¯\_(ツ)_/¯ equivalent of a pout. She wasn’t about to let her guard down about something she so desperately didn’t care about.

Next period, Studentbots’s friend knocks on my door and needs me in the hallway. I tell her one minute, but forget and she has to knock again. Apologetically I hustle into the hall and see studentbot-in-question holding back her IRL tears. Did you know teacher-in-question didn’t just give me one zero, but erased most of my assignments for the semester? Bummer. What can we do about it? I just want to know if that’s OK with you? Bummer, but I understand how we have no control over your consequence. So this this is OK with you? ¯\_(ツ)_/¯

The two students I have illustrated create interesting patterns of the 21st Century student. Student 1 is an ELL of Mexican-descent who can read English, but chooses not to. Student 2 is a Hispanic student who can read English, but only chooses to after she has to. Student 1 is a short girl with a normal body who is a little socially awkward, but seems to get enough attention from friends and boys to keep her sane. Student 2 is a cheerleader with an impossible slight frame who wears the type of clothing to accentuate that frame, attract attention and flabbergast the staff.

Student 1 has no understanding of how to pass a class, nor if she has or hasn’t. Student 2 has an innate sense of how to pass a class, and thinks she should be privileged in the execution of that how. Student 1 does not rely on anything to maintain her relationships with adults in the building because she has no relationships with adults at school. Student 2 leverages her athleticism and charms to work with the adults because she knows how to manipulate the world in her favor. Student 1 is in Guitar 1 and sometimes leaves her instrument in my classroom over the weekend. Student 2 is a two-time state champion with eyes on a third ring this April.

These women illustrate everything wrong with capital S school. People can’t be bothered to learn. Why does any of this matter? There’s a computer-based assessment with your name on it, that’s why. We are operating in a paradigm that has gone extinct, but teachnology has gussied it up enough to pawn it off on another generation. In their defense, sometimes my class sucks. Sometimes, I suck. Schools create sedentary citizens. Schools are places where creativity goes to die. Multiply that by four classes a day and you’ve got a pretty sucky day. I can sympathize. Until I can’t.

Because most days, we suck a lot less than they realize. They have teachers who are awesome. They have an incredibly clean (indeed, sometimes sterile) school. It’s safe. There are clubs and electives based upon, wait for it, classical art and mariachi and robots and metal fabrication and photography and drama and sports and green building and poetry and philosophy and forestry and other cool stuff.

Come on, Teach. Does it really matter if they cheat? Does it cost them anything to try? They actually learn more about the world when they cheat. Our whole existence is about getting that leg up on the competition. Where does it say we don’t have to earn our legs? And really, what’s the good in them knowing whether they passed or not? If the grades don’t matter, as you often insist they don’t to your students, why do you care if they know where they stand? High school is just a right of passage—it doesn’t have to be a means to an end. Saving face? Surviving? Sucking (it) up and sticking (it) out? That can be enough, right?

These are good questions. I am not trying to push my sense of (white male) morality/righteousness. Nor am I trying to push college (read: debt) onto my students. This isn’t Dangerous Minds or Freedom Writers. Rarely does a student change their academic horizon thanks to my tutelage. Honestly, they don’t. My students, the ones who have reached out after graduation, thank me for the support they had from me. Are they using commas correctly? Ha,ha right? Will they remember the profundity of the Treaty of Versailles? Yeah somebody won. It’s all I can do to even cover the subject in the face of this. There’s a name for the kind of teachers who sacrifice everything—personality, meaning, soul, facial expressions—sacrifice everything for plowing through content: Teachbots.

These students, Jennifer and Marissa, are great examples of how the education system and Teachbots have failed them for the last 11 years. At one time, this educational paradigm was perfect for churning out the next factory workers and management types—albeit largely white workers and types. Well, that world is gone. Teachers (and politicians) are the brontosauri waxing about a pre-comet planet. Few of the species adultus-worker lived to tell the tale, but the Teachbots insist to the Studentbots they are adequately prepared to exist in the same ol’ world. Let’s ground this paragraph in an example. We praise teachnology, but insist its best use is assessment.

Jennifer and Marissa are just like me (!). They know bullshit when they see it. But, between the three of us, I’m supposed to know what to do. I don’t. I have to predict the future. My crystal ball is telling me to subvert administration. Monkeywrench tests. Radicalize my paduans. Teach from the ceiling. Incorporate interpretive dance. Incorporate sadness and glee. Suffuse my classroom with oxygen. Actually? That last one is not a bad idea.

Jennifer and Marissa are suffocating just like me. So, the oxygen? Work to erase a decade’s worth of negative energy associated with classrooms. Push students for excellence, before work is due. Push students for excellence as demonstrated by meaningfulness of the work. Engage students in conversations about what it means to pass and fail—what it means to fail passing and pass failing. Insist that students are aware of their waking state. Insist that I am aware of my own.

Bots? Nah. We are brains. We are potential. We are everything. We matter. Really though, I can’t fault these girls for not realizing this. It’s how they were taught.

One thought on “Pedagogy is Poetry: Does My Classroom Matter?”