I have been sitting on this poem for a long time. Over the summer, two students passed away in separate automobile related accidents in New Mexico. Both were graduates of the class of 2012. Both had hearts of gold. I composed this poem during a summer poem-a-day workshop the week of the first students’ passing. I was clumsy in my writing during that week because of her passing.

The day of her passing, before I knew of it, I was in the library watching an elderly woman reading the newspaper. I composed a piece about reading the obituary column and finding the light of life in strangers. It was a beautiful moment. It was a dark moment.

Later, I tried to write her a love poem, but decided, in revising, that a stronger voice was writing to the love of my life. And so the writing carried the student in, but the poem left her behind.

Then the newspaper came out with a brief note about her death. The gory details and little else. It felt so impersonal and frighteningly vague. So I decided to write a better story. For a better news. For her.

It was intensely emotional reading it to my fellow poets. It wasn’t emotional until it was loud. Until it was spoken. Our living is this way. The important moments are loud: the crying baby, the applause of graduating, the celebration of marriage. It is why people remember eulogies and not obituaries.

This was also the poem that spurned a new project that may or may not have legs. I have been experimenting with a way of using voice to play with meaning and audience. This was the first work that incorporated the second person voice to interplay with the she in the news. The poem from a few weeks ago is a strong example of where that ‘voice’ has taken me. You. You should call your mother!

As well, this poem was a chance to play with the page and recreate the newspaper aesthetic, as if the weekly columned print could be a creative expression. And as a footnote to the creative word, I included a mashup screenshot of the news article that detailed the poor woman’s death. Bleeding profusely. If you had never met her, the story begins and ends there. I didn’t want that to be the case.

This poem has complicated syntax and does not fit well into a conservative view of space and time. In these moments, my grieving was greatly complicated and perhaps transcendent in some way. It gave me the chance to reimagine this shining of light of a student/young woman. To give her passing a new voice and grace. If all you have is the news clipping, then all you have is the red against the pavement. The pooling blood. 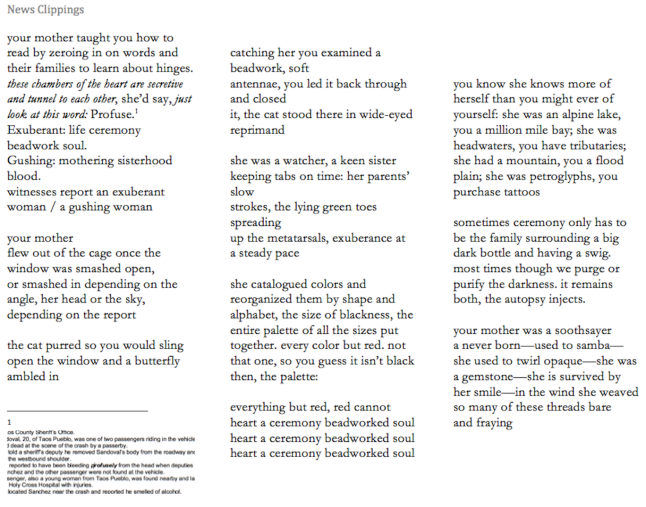