Finally I had the great honor to meet Colin Dardis at the John Hewitt Society’s reading last night. Hosted by the Ulster Museum, the reading commemorated the 25th anniversary of John Hewitt’s passing. He was a writer of Ulster planter’s stock. Lived rurally most his life, but also worked at the very museum hosting the event. I heard six poets read last night. A brief reading. Not to make my friends in New Mexico and Colorado jealous, but it rained so hard the welcoming speaker had to stop  in the middle of his opening poem. That’s rain hitting the roof four stories up. Granted it’s modern architecture, so the hull of the building is open and vast. Nevertheless, it was nice to be sipping red wine and reveling in poetry with a new friend.

It was great to see Sinead Morrissey and Frank Ormsby read among others as I have prior knowledge of their work. Very cool. 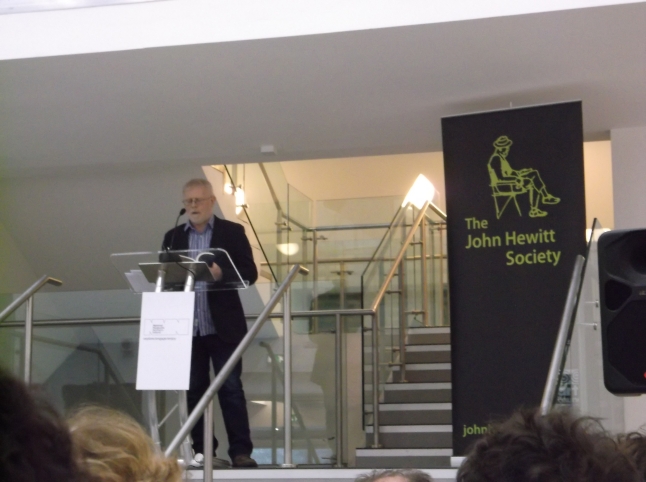 Colin introduced me to his poetic mate Chris McLaughlin (from Strabane, but no relation to the Aidan McLaughlins), and we awayed into the rain to a local pub near Queen’s University waiting out the storm. We also enjoyed the first half of Spaiin and Portugal.

We talked about slam poetry and page poetry. They have a burgeoning performance group, Voce Versa, and I had just missed a performance two weeks ago. It was interesting to hear their views of the competition of poetry. The formula of writing for the performance. The scoring of words. Our experiences with the Spoken Work were not too far off. I tried to connect them with poets on the web who are not only bringing the heat to the performance but their work stands up on the page as well. Patricia Smith and Roger Bonair-Agard come to mind. Thanks, Verse-Converse!

As the night progress, Chris and I found ourselves out under the wet lamp light, munching sandwiches from the mini store because we had missed dinner speaking of football and poetics. I really wanted to know how poets interpret the Troubles into their work. I know so many poets in the Southwest recall the loss of their culture over the centuries and how it resurfaces in their family, identity and community. Chris essentially said that the Troubles in not in play as of yet. It would be too emotionally trite for poets to go there. Keep in mind we are talking about performance poetry here. An audience would cringe at any attempt to contextualize someone’s experience with hate and violence.

This was the first time I had heard that the Troubles did not touch everyone, whether by familial loss or community identity. I had always heard and assumed that the Troubles’ tentacles had reach around everyone’s leg and kept people wriggling to get away.

Chris did mention a poet, by the name of Colin Hassard. He has done a whopping piece called Norn Iron, or how the locals say Northern Ireland. He has some great lines. He doesn’t glorify, nor chastise. He captures the essence of what it means to be from here. It is well done. Hassard’s youth was “stopping football on the streets to let army cars pass.” This is what I was hoping to find from the poetry community. At least a conversation happening about how to communicate identity, sectarian or not.

Hear and see the poem here.

“where teenage dreams are easy to beat”

“Norn Iron, you only have two seasons: winter and the rioting season” …I’ve been calling it marching season in past posts, sports fans.

“my dream is to straighten out your Parliament, abolish your democracy and declare myself King”

“we should take more pictures, apartheid meat wagon is a beautiful image”

“if you believed in religion as much as you say you do, the churches would be overflowing and no one would have ever died”

Check out Chris’ Soundcloud page and Colin’s work as well.